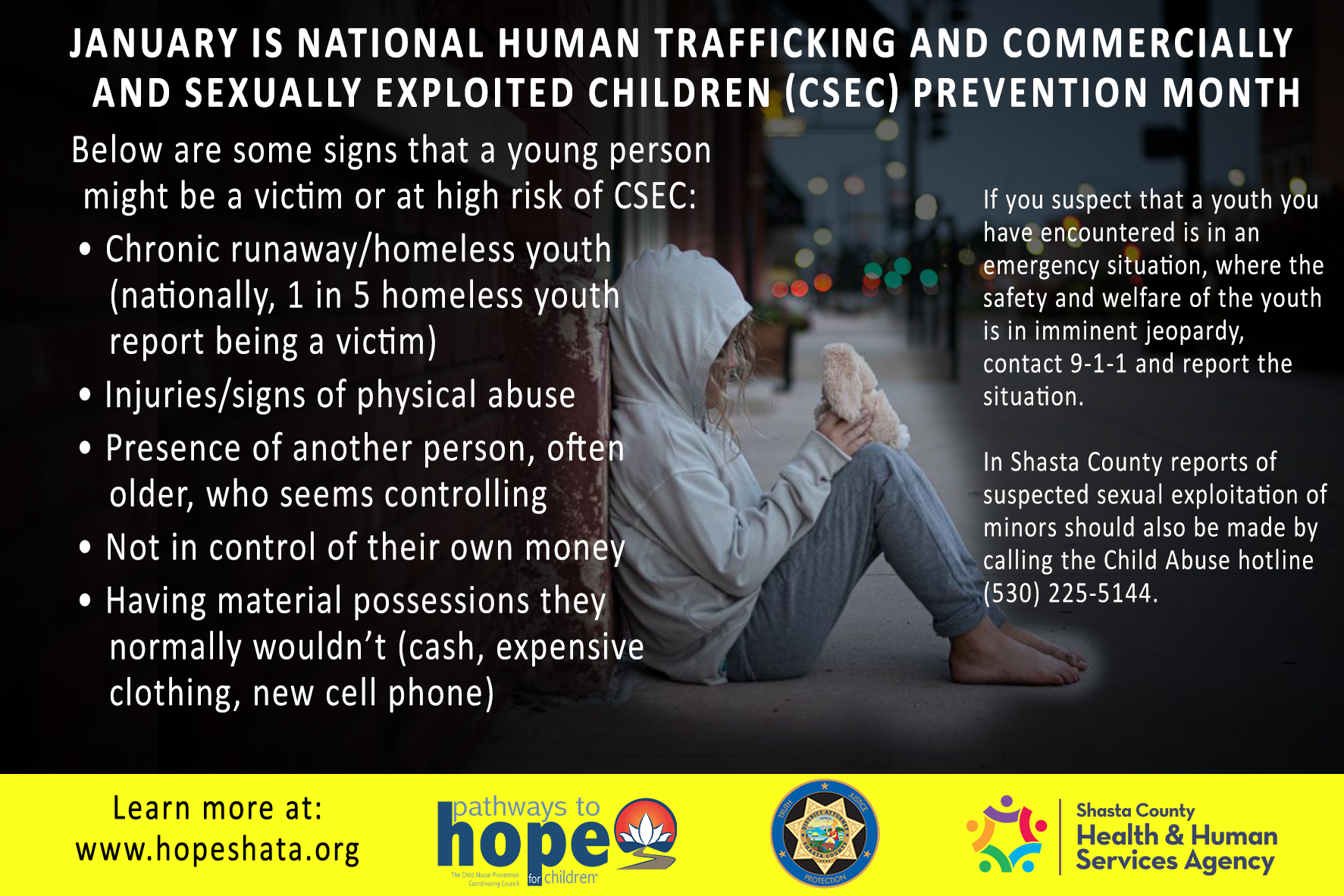 In the proclamation, President Biden leads with, “Around the world, human trafficking has stripped nearly 25 million people of their safety, dignity, and liberty — disproportionately affecting historically underserved and marginalized communities.  During National Human Trafficking Prevention Month, we reaffirm our commitment to ending this inhumane and immoral practice in all its forms.  And as we bring perpetrators to justice, we renew our pledge to help survivors recover and rebuild their lives.”

The U.S. Department of Health and Human Services’ theme for Human Trafficking Prevention Month 2023 is Partner to Prevent, it is an opportunity to highlight the importance of partnerships and collaboration in strengthening anti-trafficking efforts. Preventing human trafficking cannot be accomplished alone; rather, we must build partnerships across all sectors of society to improve the lives of those we serve.

Locally, organizations like Pathways to Hope for Children (Pathways) are focused on bringing attention to Commercially and Sexually Exploited Children (CSEC) and Human Trafficking during January.  In partnership with the Shasta County Health and Human Service Agency – Children’s Branch and the District Attorney Crime Victims Assistance Center, Pathways is asking our community to join the national efforts to Partner to Prevent human trafficking.  When we #Partner2Prevent, we can enhance our efforts to keep everyone safe from human trafficking and CSEC. Visit OTIP’s website throughout January for news and resources and the federal interagency calendar of events.

Pathways encourages individuals and business to take part in the National Blue Campaign #WearBlueDay. To raise awareness of human trafficking, we invite the public to take photos of themselves, friends, family, and colleagues wearing blue clothing and share them on social media – Facebook, Twitter, and Instagram – along with our #WearBlueDay #Partner2PPrevent and #hopeshasta hashtags. Anyone can participate, all you need is a piece of blue clothing, take a photo and encourage others to do the same and post.

Nationally, 1 in 5 homeless youth report being a victim of CSEC!

What can you do?

Sexually exploitation of minors can happen both in-person and electronically (which is more frequently experienced).

There are common myths and misconceptions regarding human trafficking that are important to dispel:

Below are some signs that a young person might be a victim or at high risk of CSEC:

If you suspect that a youth you have encountered is in an emergency, where the safety and welfare of the youth are in imminent jeopardy, contact 9-1-1 and report the situation.

In Shasta County reports of suspected sexual exploitation of minors should also be made by calling the Child Abuse Hotline (530) 225-5144.

The City of Redding offers tips to help identify human trafficking on their website at https://www.cityofredding.org/departments/police-department/report-it/report-human-trafficking .If you believe you have identified someone still in the trafficking situation, alert law enforcement immediately at the numbers provided below. It may be unsafe to attempt to rescue a trafficking victim. You have no way of knowing how the trafficker may react and retaliate against the victim and you. If, however, you identify a victim who has escaped a trafficking situation, there are several organizations to whom the victim could be referred for help with shelter, medical care, legal assistance, and other critical services. In this case, call the National Human Trafficking Hotline described below.

Call the National Human Trafficking Hotline, a national 24-hour, toll-free, multilingual anti-trafficking hotline. Call 1-888-373-7888 to report a tip; connect with anti-trafficking services in your area; or request training and technical assistance, general information, or specific anti-trafficking resources. The Hotline is equipped to handle calls from all regions of the United States from a wide range of callers including, but not limited to; potential trafficking victims, community members, law enforcement, medical professionals, legal professionals, service providers, researchers, students, and policymakers.