The science of hope

Published with the permission of Dr. Chan Hellman and his Hope Centered and Trauma Informed LLC.

The below information is from an evaluation done by the University of Oklahoma's Hope Research Center on Pathways to Hope for Children in a report titled: An Assessment of the Impact of Program Services on Parent Hope, Well-Being, and Relationship with their Children

Snyder’s (2002) hope theory has emerged as one of the most recognized frameworks conceptualizing hope as both a coping resource and psychological strength that promotes well-being.  In this context, hope is a future based orientation where one can identify the pathways to goal achievement and marshal the motivation to pursue those pathways.

While desired goals are the cornerstone of Snyder’s hope theory, focus is given to the two components of pathways thinking and agency thinking.  Pathways thinking refers to the ability to identify strategies or plans on how to achieve one’s goals.  The hopeful person can identify multiple pathways to the desired goal and effectively conceive alternative pathways or solutions to potential barriers.  Agency thinking refers to the mental energy we deploy toward our goal pursuits.  The hopeful person has the agency to self-regulate their thoughts, behaviors, and emotions when selecting and pursuing their desired goals.  Ultimately positive expectations regarding the pursuit of desired goals becomes the essence of hope.

Overall, the experience of hope has a positive influence on health and well-being. Those with higher hope tend to have lower levels of depression and higher positive affect and self-esteem. Hopeful individuals are less likely to ruminate on their trauma experiences making it easier to exert willpower toward positive outcomes (Hellman & Gwinn, 2017).

Why focus on hope?

Human service agencies working with families are increasingly striving to provide an awareness, understanding, and responsiveness to trauma in an effort to reduce its impact and create positive outcomes for both parents and children. Trauma can have a direct, immediate, and overwhelming negative impact on the physical, psychological, and social well-being including the ability to achieve desired goals. A growing body of research demonstrates that hope can buffer anxiety and stress (Cheavens, Feldman, Gum,Michael, & Synder, 2006). Research based evidence shows that hope is an important psychological strength and coping resource.  To that end, hope promotes a positive adaptation to change and is a strength that can be nurtured and sustained (Hellman and Gwinn, 2016). In this context, Pathways to Hope for Children is committed to being a hope centered and trauma informed organization striving to increase hope and well-being among the parents who receive program services.

Results of Pathways to Hope for Children's Evaluation

This program assessment demonstrates that Pathways to Hope for Children successfully provides a hope centered and trauma informed approach to parent services. Across the board, increases in hope, flourishing, positive affect, and decreases in perceived stress and negative emotions all serve to highlight the positive effect Pathways to Hope is having on families.

These parents self-reported as high experienced a significantly higher rate of adversity during their childhood as evidenced by their Adverse Childhood Experience scores. In their own perception of the impact of program services at Pathways to Hope for Children, participating parent show significant improvements in their parent child relationship quality, and hope in their parenting.

Pathways to Hope for Children programming gives parents and caregivers the tools, or pathways, to identify strategies and plans to achieve their goals.  Furthermore, that the significant increases in hope are associated with improvements in parent child relationships and parent well-being.

Adult Hope Scale.  The Hope Scale is an 8-item scale that measures the extent to which the respondent feels motivated to obtain goals and whether they can construct pathways to attain those goals (Snyder et al., 1991).  A total Hope score is derived by adding the scores from the eight items.  An 8-point Likert scale, ranging from 1 = definitely false to 8 = definitely true, is used to measure the responses.  Consistent with previous findings (e.g., Hellman, Pittman, & Munoz, 2013), the reliability estimates for the total Hope Scale for this sample was adequate (pre-test α = .84; post-test α = .83). 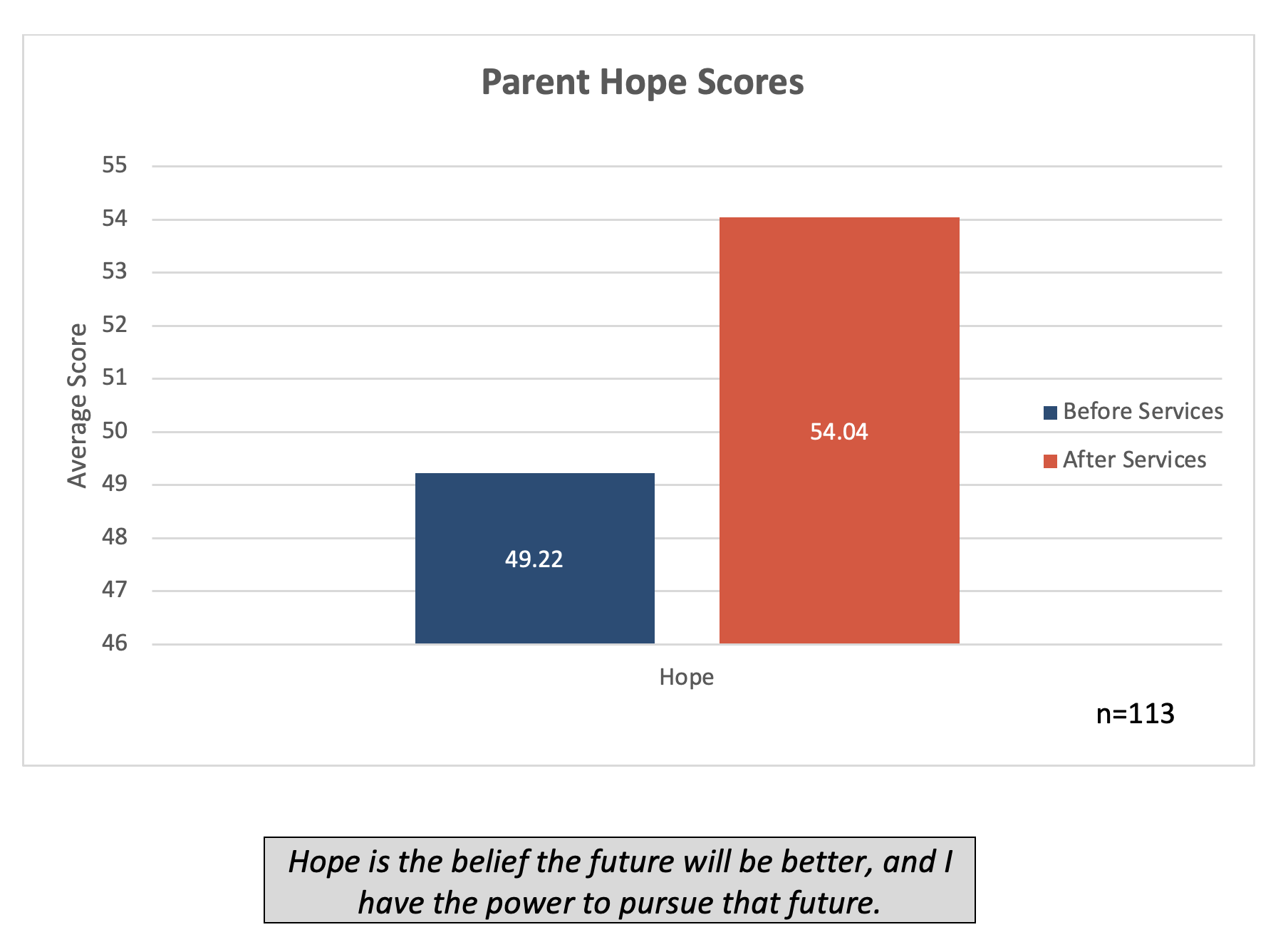 The graph below demonstrates parents’ scores on the Flourishing scale.  Flourishing represents a well-being indicator associated with positive relationships, goal achievement, and finding meaning and purpose in life. Paired samples t-tests were computed to examine the differences in pre- and post-test scores. The results demonstrate a statistically significant improvement in flourishing among parents after receiving services at Pathways to Hope for Children [t (110) =-4.20; p <.000]. 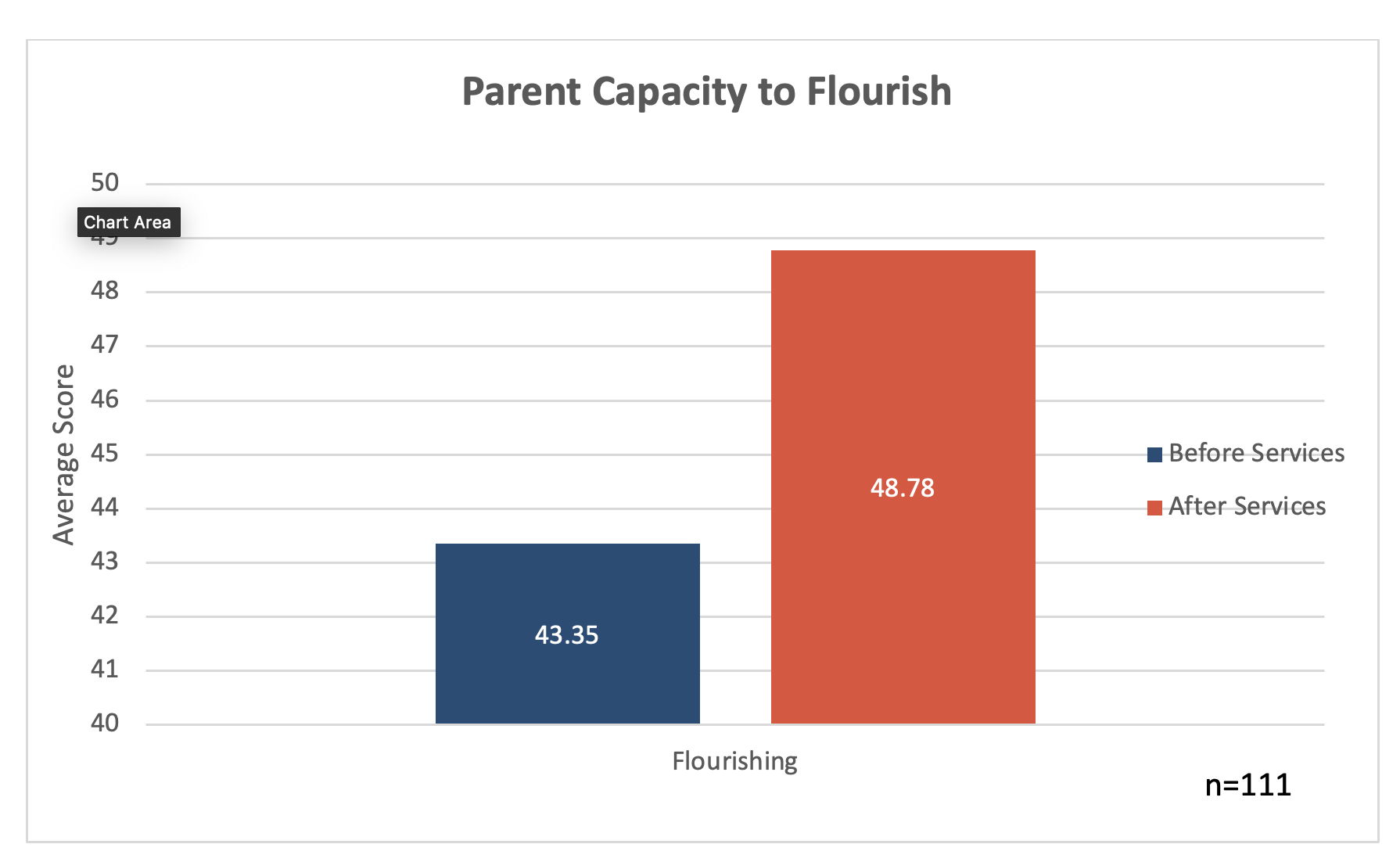 In an attempt to assess the impact of program services on parent child relationship quality, parents were asked to report their hope in ability to parent, awareness of trauma on child development, and the overall quality of the relationship with the child.  Paired samples t-test were computed for each comparison with Bonferroni correction for number of tests.  As seen in the graph Hope in ability to parent showed statistically significant improvement [t(113) = -11.42; p < .001].  Awareness of trauma also showed statistically significant improvement [t(113) = -9.55; p < .001].  Finally, quality of parent child relationship also showed statistically significant improvement [t(107) = -8.35; p < .001].  Taken as a whole, these findings show a positive impact of parent services at Pathways to Hope for Children. 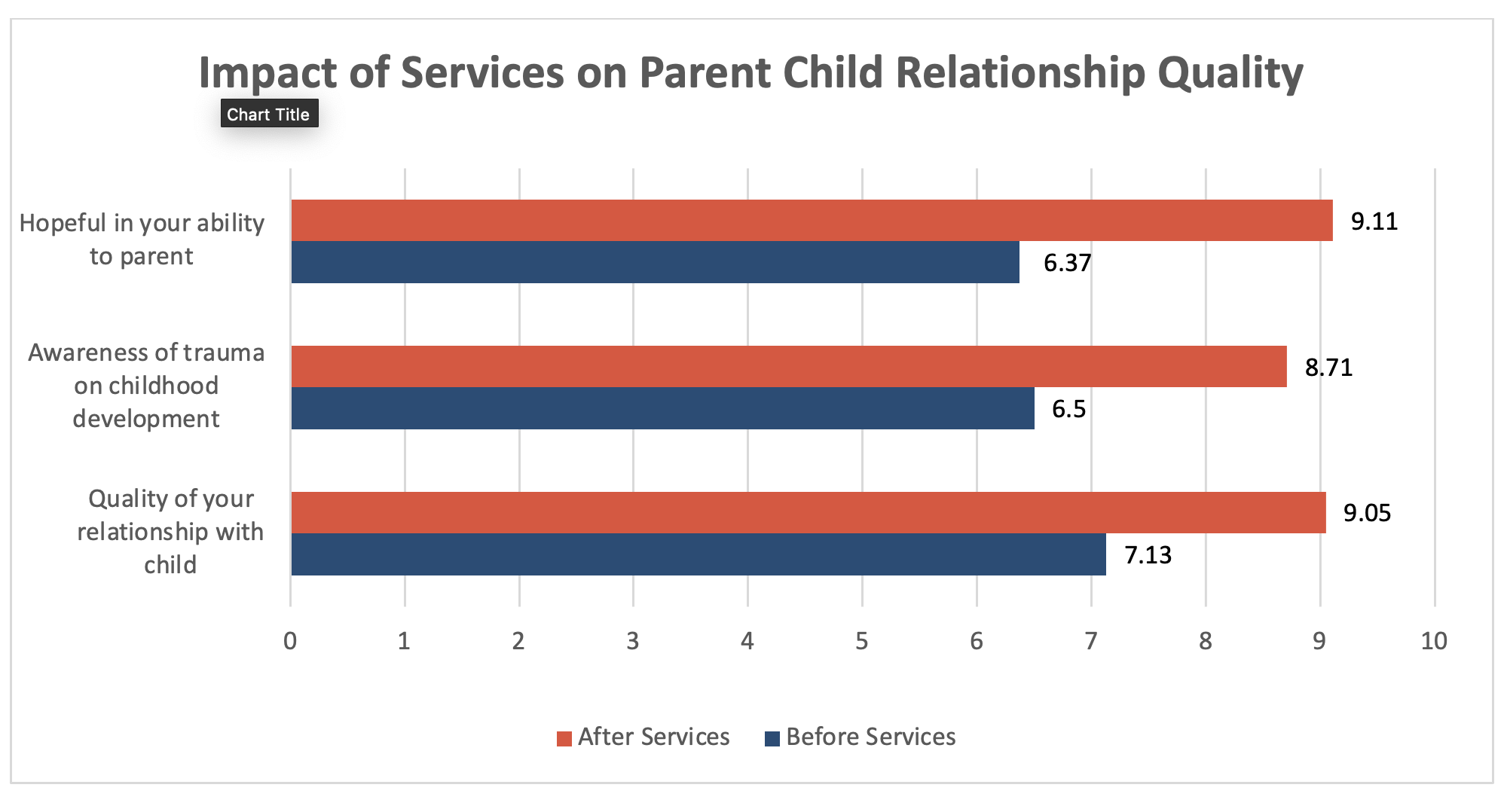